OK, so we have this new puppy.  We’ve had him for about 3 months now.  His name is Buddy.  Buddy isn’t really a dog, he’s a small horse.

I’ve always had toy poodles, Annie is 5 pounds and CoCo is 6 pounds.  My son Wade decided that we needed a dog that was bigger than my feet.  Buddy is a golden-doodle, his mama was a golden retriever and his daddy was a standard poodle.  At 5 months Buddy weighs easily 70 lbs and his paws are bigger than my feet.

Buddy is a dork. 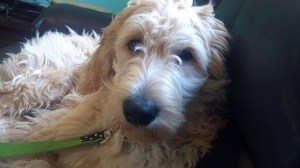 (He should have been named Gilligan). He’s the only dog I’ve ever seen with a comb-over.  He hasn’t figured out yet that he isn’t the same size as the toy poodles, so he tries to act like the toy-poodles.  There is no part of my lap that can hold this beastie, but he tries anyway.  Buddy also picks fights with CoCo, but she can take him down!  Annie just snarls at him and he leaves her alone.  There’s nothing funnier than watching Buddy fall off the couch because a 6 pound toy poodle got the best of him.

Buddy has intestinal issues, that means that he has to have special food and he eats like a horse (pun intended).  He is also the most ADD dog I’ve ever seen.  He’s a spaz with no coordination and no traction on the hard wood floor.  He rearranges the furniture every day with his slipping and sliding.

Taking Buddy for a walk is quite the adventure.  Making it back home with no face plants or wiped out knees is a miracle.  Dislocated shoulders are also a great possibility.

Buddy has started doing something though that has touched my heart.  He follows me wherever I am in the house and lays down on my feet.  It’s so cute and so not convenient to have a horse head lying on your feet, but that is how Buddy tells me he loves me.  And even though I complain about Buddy a lot, I love him too.